Once again I am sharing some sewing projects with you. They belong in two camps: tried and tested and revisiting a failed pattern. 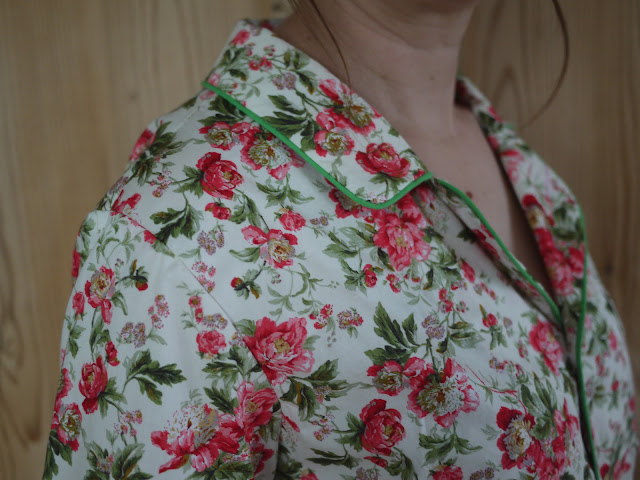 My first project is a beautifully made pair of Carolyn Pajamas using Rose and Hubble fabric. I have made these in mindful stages, enjoying the process of making something carefully. They were a birthday gift for my friend in March but I couldn't resist modelling them for you for five minutes! She loved them. 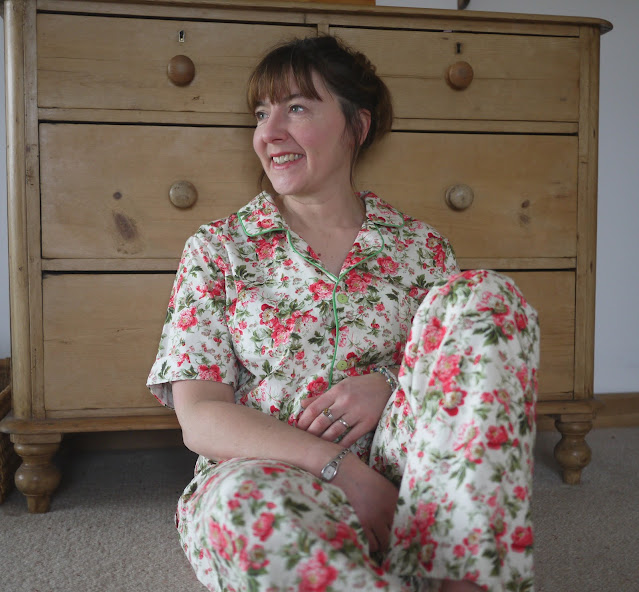 The pattern is an investment in time and money but the more pairs I make the better value the pattern becomes and really, it is timeless style so when would you ever need another pattern for PJ's? This is my fourth set. I have a short and long sleeved set for myself and I have gifted the other two sets since having the pattern three years ago. 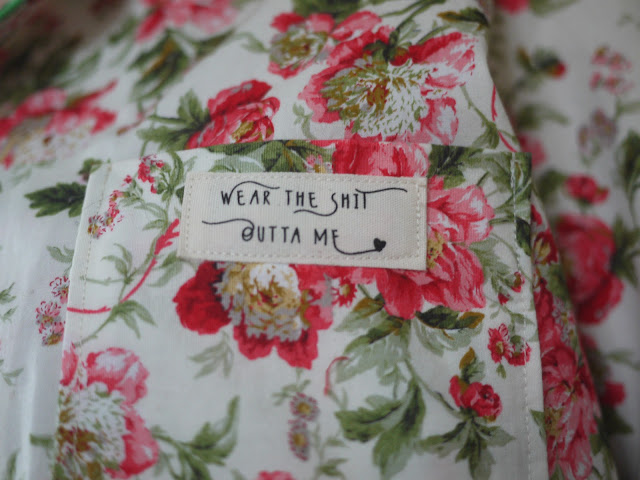 This beautiful top is again a careful sew. I have made it for another friend's birthday present. She is younger than me so the on trend balloon sleeves will be swooned over. The fabric is a light jersey and the pattern is the Billie sweatshirt and dress pattern by Tilly and the Buttons. 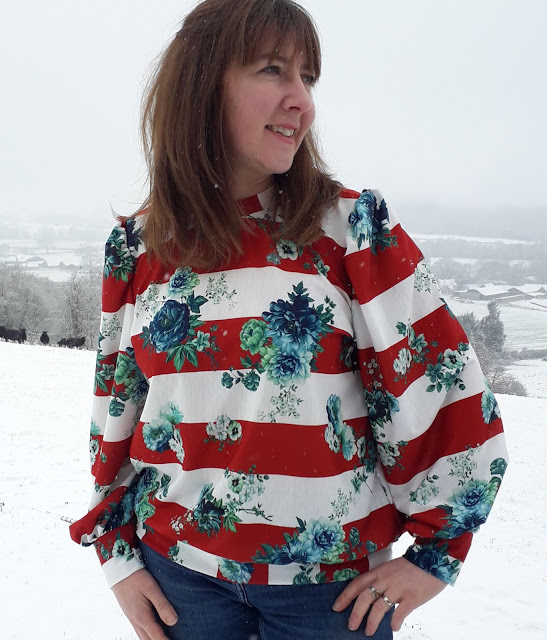 I also entered it into the 'Top of The Tops' competition over on the Minerva website. I was really pleased with this sew up. 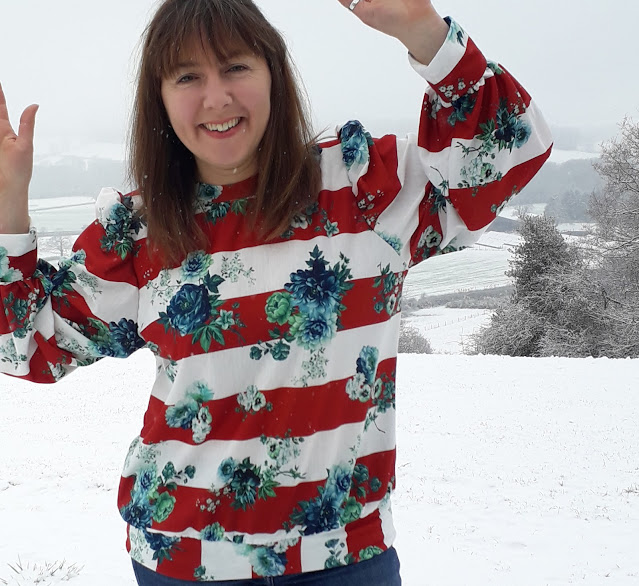 Next up is a faster make. A one tunic wonder from one metre of cable jersey. I mean it was a squeeze to get it out of one metre but I am short and I cut the sleeves separately to find enough fabric, however it worked out OK in the end. This is a brilliant stay at home tunic to wear with leggings which will see me through all of the transitional weather which comes between the seasons. The pattern is essentially a lengthened T-shirt which kicks out a bit. You could also use the Tilly and the Buttons Coco if you are not confident enough to draft something. 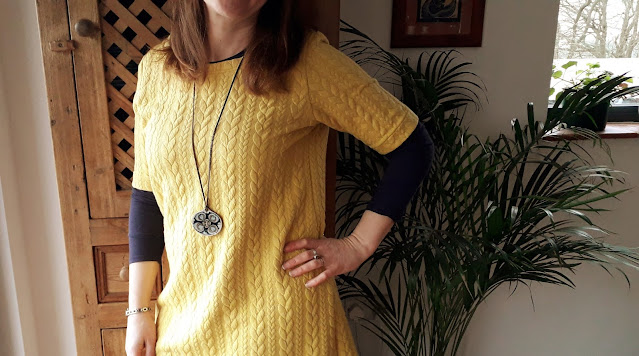 Devotedly, I made a pair of viscose jersey trousers (anything that wasn't jeans was requested) for Heidi. Even though it is an easy pattern, it was not easy fabric to sew with. I seemed to turn a beginner project into an advanced one simply with my fabric choice. I was glad when they were done. These are the Luna pants which again is expensive but now Heidi is moving into size 6 and 8 adult sizes I am seeing patterns as double value if we both get something out of a pattern purchase. My turn to have a pair of these next... 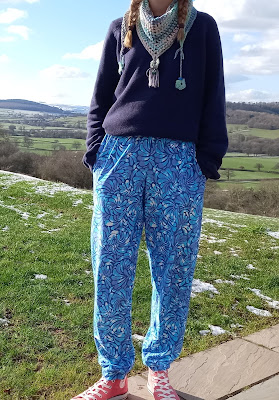 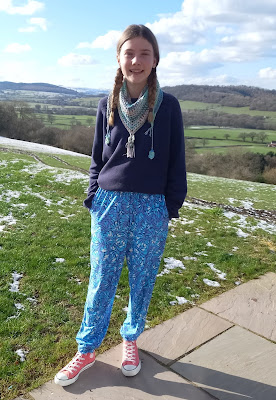 Lockdown time has afforded me some opportunities to revisit some patterns that have been less successful in the past. Alongside this, I have also bought a shed load of cheap fabric from an online seller called pound a metre. This has meant that rather than choosing safely with patterns I know all the time, I have used the cheaper fabric to try out some things that went wrong in the past without worrying that I am wasting fabric. Enter the pattern revisits... 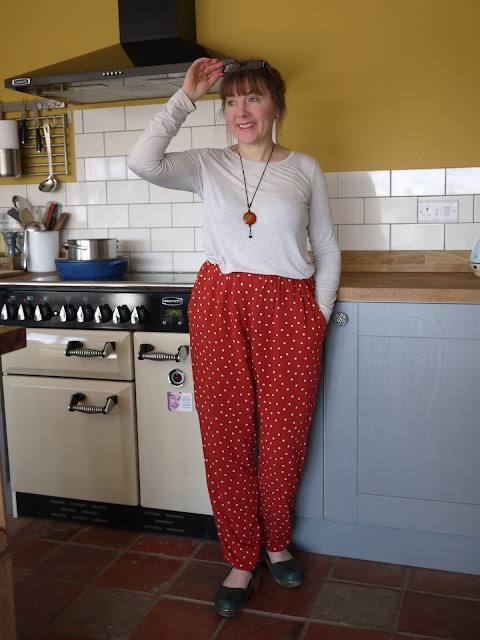 The first pattern to retry was the Tilly and the Buttons Marigold peg leg trousers. My first pair were huge in the crotch, the waistband was too deep and the overall fit was not comfortable - the waistband was nearly touching my bra band!

I measured the pattern piece against my actual front and back crotch measurement and took out a whopping 2.5 inches off the shorten line on the back, front and pocket pieces. No wonder they had a saggy bum. Also I made the waistband half the size and used 20mm elastic. 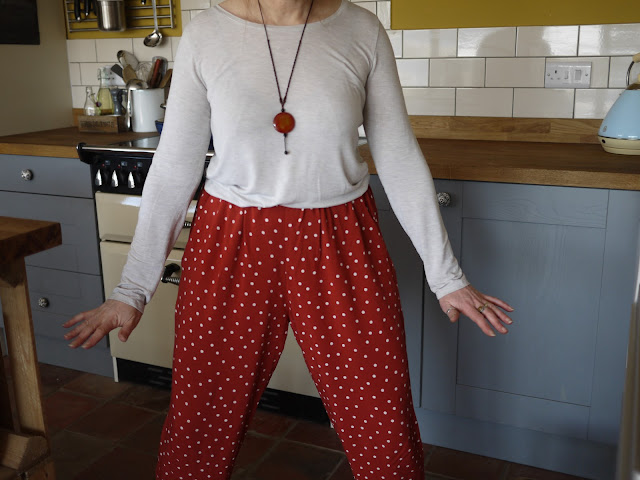 The resulting trousers are exactly what I wanted. The viscose was £5 for a 3 metre piece so I was happy to give it a go. 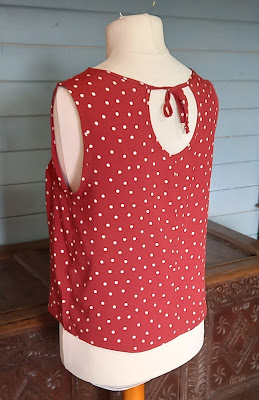 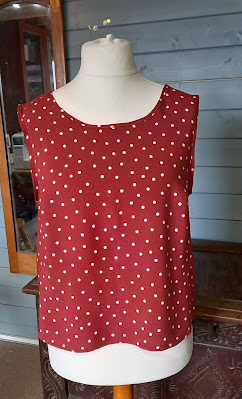 There was plenty of this fabric left to retry the Hello Sailor top which was too small across the shoulders and the bust darts were in the wrong place first time out. This pattern alteration was more risky but worth it. I made a fabulous top with the lovely tie back feature. When worn with the trousers it makes the ideal faux jumpsuit with easy toilet access! 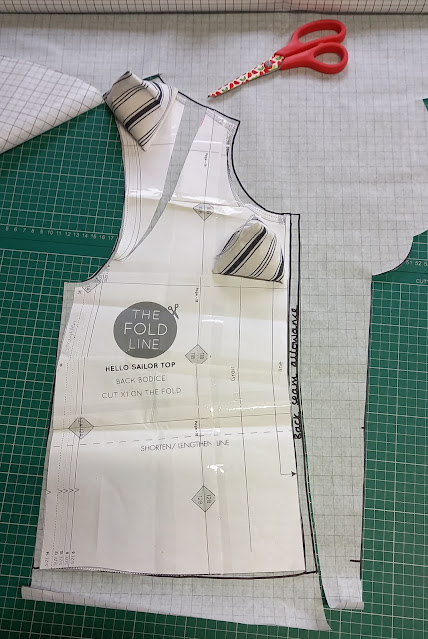 The fabric I had from pound a metre was not top quality but as good as any ready to wear clothes. The spotty viscose is just fine. I have lots more because I bought a 30m for £30 jersey bundle which was better than I expected it to be - there were not any patterns at all, only solid colours. I have already used some to line my three coats, make a T-shirt for Big girl, PJ's for small girl and make some underwear so I have had my money out of it already. What it does give me, more than budget clothes, is a permission to just have a go at something new and I think that is kind of priceless.

The girls are back to school next week so I can connect with you all  once again. Maybe the sewing will calm down a bit! Stay safe.